What is the General Plan?

The General Plan is the foundational document that guides the Town through the next 10-20 years of community planning and growth management. The document establishes a vision for the desired future of Carefree and then utilizes a series of goals, policies, actions and maps to achieve implementation. It is a conceptual plan for evaluating existing development conditions, making forecasts, and outlining broad policies that the Town will use to implement its vision through other more specific plans ad measures. Some of the more specific measures include the Zoning Ordinance (PDF), Proposed Capital Improvements, Transportation Plan, and development guidelines.

Cities and towns in Arizona are required to establish a General Plan and update it every 10 to 15 years. The previous update, Town of Carefree General Plan 2030, was ratified by voters recently on November 6, 2012.

A hard copy of the General Plan 2030 (PDF) may be viewed at Town Hall for free or purchased for $30 to recoup copy fees. If you have any questions, you may call the Planning and Zoning Staff at 480-488-3686 or visit the Carefree Administrative Offices, located at 8 Sundial Circle.

Why update the General Plan now?

State Law requires General Plans to be updated every 10 years. Since the existing Carefree General Plan was last ratified on November 6, 2012 and due to delays as a result of the COVID-19 pandemic, we are now at the next 10-year planning horizon. State Law also requires the General Plan to be adopted by Town Council and ultimately ratified by voters of Carefree. The General Plan Update is scheduled to be placed on the November 2024 ballot for final voter ratification.

What topics does the General Plan address?

What is the schedule and process?

The beginning stage of the project focuses on the existing conditions of the Town as it stands today. It culminates with the development of the Community Assessment Report.

An integral component of the General Plan is public engagement. Consequently, this phase is continuous throughout the project process. To engage as many residents as possible, there will be multiple opportunities for the public to get involved and give input. Two Community Workshops and two Discussion Hubs will occur over the course of the project, along with several informal pop-up or mobile workshops. See the “Participate” section below to view upcoming events.

Taking in all of the input received from the public, Town Staff, and community stakeholders, an updated draft of the General Plan is written. This draft undergoes a formal 60-Day review process where the document is open to be reviewed by the public, state and local government agencies, and other community organizations to give final feedback before the adoption process.

This stage works to address all of the comments received from the various stakeholders from the 60-Day review period before formal presentation to the Planning & Zoning Commission and Town Council. Following adoption via a Town Council Vote, the plan is placed on the ballot to be ratified by Carefree voters. Currently, the General Plan Update is scheduled to be placed on the November 2024 ballot.

There will be multiple opportunities for the public to get engaged in the project. Learn more about how to get involved and give your input today! Carefree Public Engagement Plan (PDF) 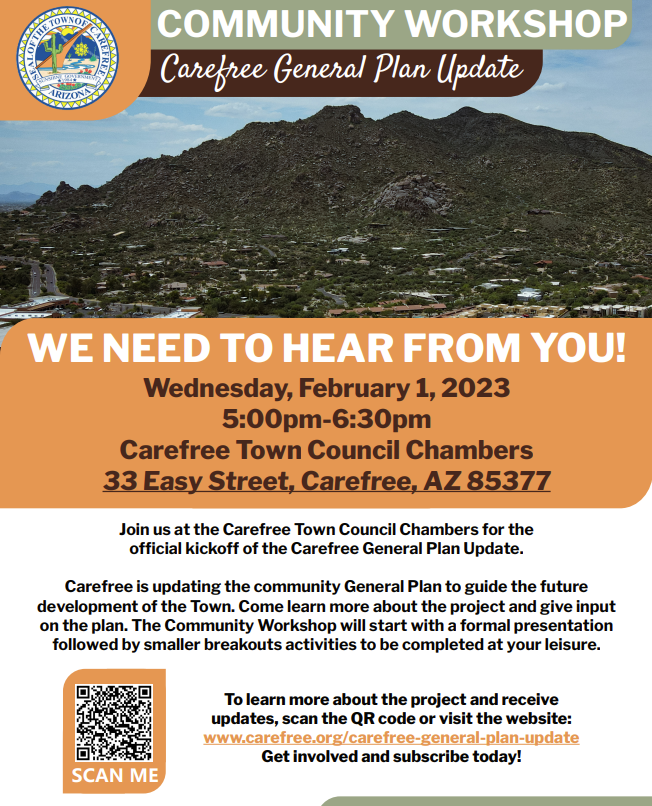 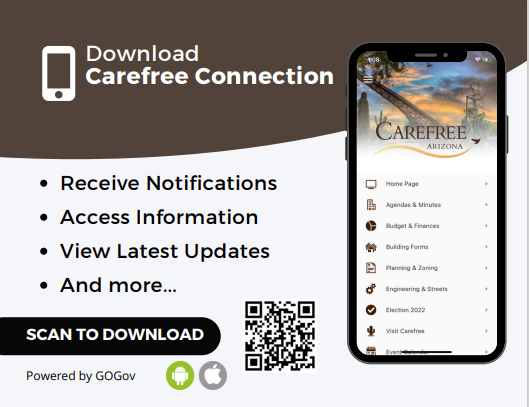